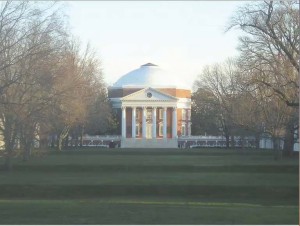 Teaching songwriting seems an oxymoron to some; don’t songs just flow? We know it’s true, as many songwriters tell us so. Why I’ve had that experience myself! And yet, having studied music since age 5, and barely remembering a time before I would run to our clunky old upright as soon as I woke up, I know that inspiration is only possible when music becomes one’s native tongue. For this, it does not matter whether your experience comes from aural or written sources; what does matter is internalizing a sense of how music goes. Making music is an amalgam of intense work and mystery. It depends on a complex interaction of what you know, what you can imagine, what you can think, what you can hear, and what you can externalize. The latter comes in multiple forms: performance, recording, notation, or some combination of these.

Often, people focus on the emotional element to the exclusion of all else. Wesley Stace, writing in the New York Times (Songwriting on Demand, 6/21/13) about a songwriting course he team-taught at Princeton, said ‘…the university is a place of the intellect, but songs (which can be anything they want) are not, or need not be, intellectual.’  I fundamentally disagree with that statement. Composing requires ‘…the exercise of understanding…’ which the OED defines as one of the properties of the term ‘intellectual.’ I don’t see this as an either/or proposition. Music can and does evoke powerful emotions, and its creation also involves intense prior learning, that is an intellectual, process. It may be implicit rather than explicit learning, involving substantial practice and apprenticeship; or it may combine these with the more direct study of the elements of music.

This topic resonates deeply with me, as I have been teaching songwriting at the University of Virginia for a number of years. During that time, I have had an ongoing internal debate as well as many discussions about it with friends and colleagues. What, exactly, is one teaching in a course on songwriting, and how can one best accomplish it? I certainly never had such a course — popular music was as anathema in the academy in the 1960’s and 70’s as it is focal today. The kinds of questions I grappled with in developing my own course ranged from what repertoire we should study, to what would be the right balance between creating music and lyrics, to the type of notation that should be required, and what kinds of performances would bring the songs to life? And what should students learn about the pop-industrial complex through which songs squeeze their way? 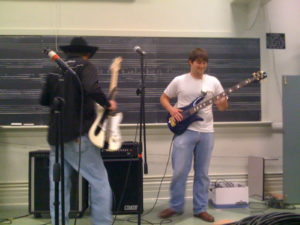 I decided to use genre as my starting point. Why? Because I want students to have a context for their own songwriting and a sense of the riches of its history, starting with the headwaters of the blues, the harmonic and lyric inventiveness of Tin-Pan Alley, the reverberating impact of the electric guitar, the backbeat rhythms and wildly varying contours of Pop, the pithy sagas of Country, the verbal dexterity and passion of Rap and Hip Hop, the far reaches of Alt-Indie, the orchestra of production techniques, the intense emotion of it all. Of course it’s an impossible quest. But in choosing examples from this panoply, I want to pique students’ curiosity, jolt their imaginations, offer some models, and get them to listen to repertoire they might otherwise never encounter, from Memphis Minnie to Lupe Fiasco.

And, I want to teach music theory in action. I know that many people say ‘ugh’ when they even hear this word, and think of it as killing the music by examining it, just as microbiologists stain dead specimens to examine them under the microscope. Instead, I think of the study of music theory as fantastic ear training, as a means of understanding the very stuff of which music is made, and how musical design has changed over time. And, while some think of music notation as unnecessary in our record-everything era, and would like it to go the way that cursive writing seems to be going, it enables types of musical design, understanding and sharing that are otherwise impossible. So, I require lead sheets, with accurate rhythmic notation of melody and harmony, as well as live performance and recordings. And we work hard on ear training as well, on the premise that the more one can perceive, the more one can imagine. Again, rather than either an aural or a written tradition, I want to blend them. 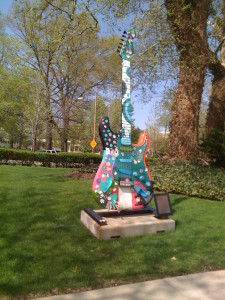 In practice, we start each class with a song — an individual student performing a cover of a song s/he likes and had posted to our class website, together with a discussion of it. This activity, first suggested by one of my outstanding teaching assistants, Joe Adkins, himself an excellent songwriter and composer, expands everyone’s repertoire base and provided an intimate performance setting. Then, in addition to studying songs from multiple sources, students collaborate on several projects, as well as creating their own songs. Each student writes lyrics as well as composing music, to give them the experience of the entire process. And, everyone uses contemporary production techniques on at least one song. The goal in addition to developing songwriting skills is to enrich the understanding of the songwriting process and the ability to analyze and understand the design elements involved.

While relationship songs undoubtedly take pride of place in terms of student interest, we also listen to and compose topical songs. We also discuss how topical songs can focus communities and result in important actions. There was some resistance at first, but some of the most powerful songs often come from this assignment. The students created songs that ranged from amusing to poignant, and over the course of the semester, their grasp of the individuality of different styles and their own development as songwriters flourished. Several of their songs are knockouts. I include a small sampling here from the fall semester of 2013 and will add to it in the future. I am grateful to these songwriters for granting permission to include their music.


It’s twelve o’clock and you hear the door open
The smell of alcohol drifts in and reeks
He shouts for you and tells you that you’re worthless
And thinks that you have been a whoring cheat.

Cause you’re all that I have
And I’m all that you need
So tell me you love me
And lie to me.

He stumbles up the stairs to try and reach you.
But in the end he falls right there asleep
You lie in bed alone and tears start welling
You used to think he was the one for keeps.

You can’t take any more, you get up out of bed
You pack all your clothes and say lines in your head
When your hand’s on the door he’s behind you and pleads
On his knees he cries out that he’ll die if you leave.

Final Chorus
Cause he’s all that I have
And I’m all that you need
So tell me you love me
And lie to me.

Cause he’s all that I have
And I’m all that you need
He’ll tell you he loves you
And you’ll never leave.

Verse 1
Daughter, don’t cry about the things you can’t change
And if change leads to death then there’s something to blame
The mannequin grins with her permanent stare
She knows you’re not eating, you’re as hollow as her

Daughter, my love, I know this is not fair
But you must not give into the good city’s prayer
“Father, I’ve sinned, I’ve eaten more than I should
I repent, I repent in the name of what’s good

I swear to your name, I’ll be as light as air
The weight of this body is more than I can bear”


Now I’ve been datin’ this girl named Payton, and I gotta say
That I’m thinkin’ it’s fate, an’ my heart’s been racin’ since that first day
Now Pay’s a perfect 10, a lot more than a friend
I don’t usually go there, but I’ll love her ‘til the end

So I went and got this bling, what I mean, I’m talking bout
This spring, gonna give her a ring, but there’s one thing
Yeah we’re suffering cuz our state, you see, will never let us be
Let us be free, free to be properly, man and wife.

It’s our life, and we don’t need
discussion of repercussions, say it loud say it now …

It’s legal in 19 states, so that’s going for us
But that’s not enough, I say, there is no way
Until Pay can say I do, this ain’t taboo, for you
See this bridal is primal, it’s vital,
we just want to be entitled, I mean it’s in the Bible,
that cuz and cuz can be joined by love
so let me love my cuz.

Well I loath the prose they impose, sayin Pay and I are
Weird, queer, something to fear. Y’all just need to hear
What I’m preaching, the word that I’m teaching
Cause I am dreaming of reheating intrabreeding,

Does that make me an unappealing being?
Am I a monster for following my heart
From start to end, through the twists and the bends?
I don’t mean to condescend, offend, but I can’t comprehend

How you can pretend, you need to repent, this is what God recommends, amen
So suspend and ascend, there is no sin in cousin
No sin in cousin.