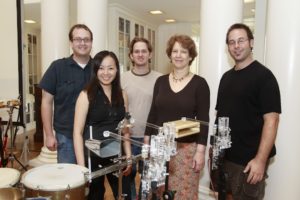 Teaching is central to my life as a composer. As Rabbi Hanina, in the Tractate Ta’anit of the Talmud, says, “I have learned much from my teachers, more from my colleagues, most of all from my students.”  Close interaction with students, at both the undergraduate and graduate level, has encouraged me to remain engaged, whether in the case of the quickly evolving field of computer music or in developing new courses ranging from The Mind of the Artist (team-taught with art historian David Summers and cognitive psychologist Michael Kubovy), to Songwriting, to Psychology of Music (team taught with cognitive psychologist Michael Kubovy) to undergraduate music theory and graduate seminars on topics such as Temporality in Post-tonal Music and Parsing the Electroacoustic.

I founded the Virginia Center for Computer Music in 1987-88, to create opportunities for students and faculty in the new area of digital music, to develop new courses, and to contribute to new research. I also authored multiple successful grants,totaling more than $100,000, including an Academic Enhancement Award, for which the department received $60,000 over three years to further the program. More information about the VCCM can be found here. I was also a principal designer of the PhD program, inaugurated during my second term as department chair, in Composition and Computer Technologies at UVA. This dynamic program has flourished since its inception. My teaching always combines project-based and theoretical work. I have guided numerous undergraduate and graduate students, and those who have completed the PhD have a wide variety of interests and achievements. Some examples include Juraj Kojs, Peter Traub, Steve Kemper and Scott Barton, and Yuri Spitsyn, who is doing ground-breaking work in the application of MIR techniques to compositional design. Other graduates’ exciting work ranges from cyberinstruments and physical modeling to net-based art, robotics, interactive dance and electroacoustic music.

While it is critical for students to understand conceptual frameworks and historical context, it is also crucial that they actualize that understanding. How they do so of course depends on the level and nature of the course. In a computer music course, it might involve sonification of a data set, while a project in a counterpoint seminar involved analyzing and then directing a performance of Palestrina’s Sicut Cervus. Songwriting, projects include collaborative performance of individually-composed songs developed and critiqued in group settings, as well as the development of songs modeled on traditions ranging from the blues to those of current playlists.

Disciplinary changes have also affected my notions of what students both ought and need to know. When I began teaching, music theory was primarily taxonomic or structuralist in its stance. Scientific (some say scientistic) approaches were common. Although these did and do provide useful tools for understanding musical design, they typically ignore cultural context. Cultural Studies, an often welcome corrective, sometimes turns the lens from particular musical artifacts to the cultural work they do; and away from concert music to popular music and spectacle. It is the integration of both cultural context and particular musical embodiment that informs my teaching.

While at UVA, I served two terms as Chair of the McIntire Department of Music, leading the establishment of the first PhD program in music in Virginia, and including the PhD in Composition and Computing Technologies. I also established the Free Bridge Quintet, and oversaw the continued growth of the entire program. While at UVA, I have been a Senior Fellow in the Commonwealth Center for Literary and Cultural Change, organizing a seminar on Computing and Cultural Change with guests including John Chowning and Max Matthews; and was an Associate Fellow in the Institute for Advanced Technology in the Humanities (IATH), applying new technologies to compositional design. I was also named ‘Teacher of the Year’ by the University’s secret Z Society, and am the first to be promoted to the position of chaired professor in the history of the department.

In demand as a Master Teacher, I have served in that capacity at the Atlantic Center for the Arts, the Bennington Chamber Music Conference, at California Summer Music, the Wellesley Composers Conference, and as BMI Composer-in-Residence at Vanderbilt University. I have lectured widely, ranging from the Leemensituut in Leuven to Haifa University to the Verona Conservatory. For a more complete list, see the CV on this website.